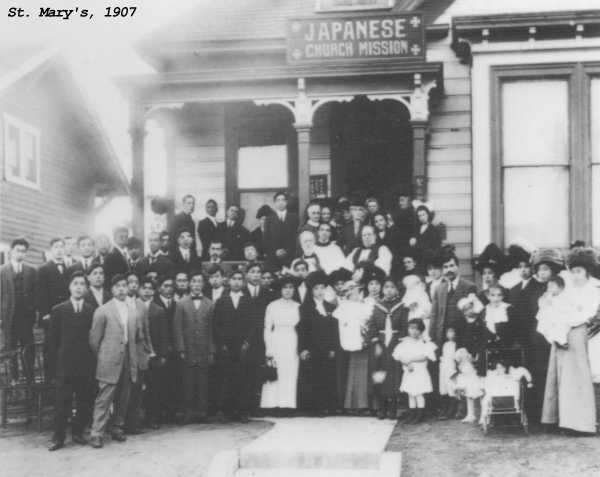 Founded in 1907 by Mary Louise Paterson, a former missionary to Japan, St. Mary’s began as a mission to minister to Japanese immigrants in Los Angeles. The Reverend John Misao Yamazaki, himself an immigrant from Japan, was the founding vicar of the Episcopal Mission. During this period, many of the parishioners lived within the neighborhood of the church. St. Mary’s served as a hub of community activities for the Japanese-American community and served to help Japanese immigrants assimilate into the American culture. Since many of the members of the congregation were Issei, first generation from Japan, services were conducted in both Japanese and English.

During World War II, as a result of Executive Order 9066, a majority of the congregation was evacuated to internment camps. While in the camps, The Reverend John Misao Yamazaki and his son, The Reverend John H. M. Yamazaki, continued their ministry, conducting services in the barracks of the camps. The World War II experience is an important part of St. Mary’s history as it bonds many members of the congregation.

At the end of the War, many of those interned returned to the Los Angeles area. Since the majority of the Japanese families sold or gave away their homes before internment, many in the Japanese-American community had nowhere to live. St. Mary’s became a refuge and resource center for them. St. Mary’s opened up the church and the vicarage was used as a hostel for those without housing. St. Mary’s also re-established a Boy Scout Troop, which remained active until 1969, and the Girls Friendly Society, which continued until 1982.

During Father John’s tenure, St. Mary’s thrived with many youth programs. St. Mary’s ran their own pre-school from 1967-1985 and, in conjunction with the Wilshire YMCA, had youth activities such as Indian Guides, Gra-Y (a sports program), and Golden Eagles.

For twenty years, the Summer Vacation Program was a major outreach effort to the members of the church school, the neighborhood, and other organizations. Volunteers conducted an imaginative program of crafts, skills, music, storytelling, and outings which focused on religious and moral teachings. This was later made into a Diocesan and National Church program called the Summer Works Project.

The Christmas festival was a big event for all the Sunday School grades and youth groups. Every child from pre-school to high school participated in the program. The Junior YPF (Young People’s Fellowship) re-enacted the Christmas Eve Nativity scene and Senior YPF would do the “prelude” to Santa Claus. The festival also was an evening of appreciation to all the advisors and teachers.

The other major event for St. Mary’s was the Annual Bazaar Carnival. The Bazaar Carnival was held on the third Saturday in May, and was known throughout the Diocese and the Japanese-American community. Local businesses donated many of the goods that were sold. This event brought church members, families, and friends together in fellowship. The money which was raised helped the Building and Capital Fund and other church organizations. The church members made chicken and beef teriyaki, chow mein, udon, sushi, homemade pastries, and strawberry shortcake. Fruit, vegetables, and flowers were also sold. There were many game booths for the youth and a “Small World” game area for the pre-school age children. During the best years of the Bazaar Carnival, St. Mary’s would raise $30,000. The Bazaar Carnival was last held in May 2008.

From 1986 to 1991, The Reverend Mitsuo Akiyoshi served as rector. He introduced to St. Mary’s the first female assistant rector, The Reverend Sonja Pearson. It was during his tenure that the high altar became a free standing altar and the dossal was removed. Similar to many Episcopal churches at the time, these were controversial decisions. Upon his departure, in 1991, The Reverend Kathleen Cullinane (then assistant rector known affectionately as Mother Kate) was called to be St. Mary’s first woman rector and served our parish until 2000.

Mother Kate’s meaningful and accessible sermons were extremely popular and brought in new members as well as former members. She facilitated the goal of the Endowment Committee to raise five hundred-thousand dollars. She brought the Head Start pre-school program to St. Mary’s in 1995.

Even though there were two rectors following the official retirement of Father John at the end of 1985, his influence on the congregation remained strong until his death in 1998.

To serve the changing culture of St. Mary’s neighborhood, The Reverend Alexandra Conrads was hired to begin a ministry targeted toward the surrounding community and began services in Spanish. She left in 2004.

The Reverend Nicole Janelle became the next assistant rector and continued the outreach to the Spanish-speaking community. She and The Reverend Alix Evans wrote several grants that increased programs directed at serving our local community. These included Guitarworks, providing guitars and lessons to local youth; nutrition classes offered through Master of Public Health student intern; a summer day camp for local youth, facilitated by an intern sponsored by the Lilly Foundation; and yoga classes. The yoga classes later turned into aerobics classes per request of the local community. The Reverend Nicole Janelle left St. Mary’s in late 2006.

In April 2006, the parish broke ground on the Yamazaki Memorial Community Garden. The garden provides a place for neighborhood families to plant and grow their own fruits and vegetables. It is also serves as a meeting place for the local neighbors. In 2007, St. Mary’s was awarded a Community Beautification Grant by the City of Los Angeles Board of Public Works in support of the Yamazaki Memorial Community Garden.

The Reverend Floyd “Butch” Gamarra, retired clergy, was hired as a halftime assisting priest in 2007.

St. Mary’s celebrated its Centennial on May 27, 2007, with Holy Eucharist and a dedication of the Yamazaki Memorial Community Garden. Parishioners were able to look back and reflect on St. Mary’s past and honor the pioneers who devoted their lives to the church.

Sadly, in October, 2008, the much beloved Reverend H. Alix Evans passed away. This time was followed by a period of mourning and grief. We celebrated her life and ministry with a memorial service on the first anniversary of her death.  The Reverend Marilyn Omernick was named Priest-in-Charge in November 2008, and she helped guide the congregation through a period of transition. 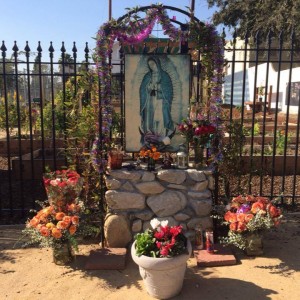